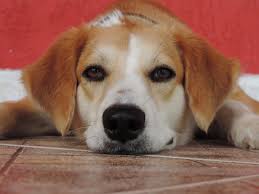 As a dog owner, it breaks your heart at the idea that your best friend could be in pain and you don’t know it.

But dogs often hide their pain, it’s instinctive. Animals in the wild can’t show that they are hurting or weak because that puts them at risk with predators.

So if they don’t show it when something is wrong, how to know if your dog is in pain?

Here is a list of some things you can look for to give you a clue that your pooch is telling you something is wrong.

Decrease or Loss Of Mobility 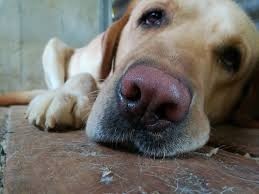 If your dog is limping or walking very stiffly, that’s a pretty obvious sign that he may have an injury or arthritis is setting in.

But some changes in mobility can be more subtle. He could be sleeping more than usual, not as active outside, avoiding walking up or down stairs, for example.

You’re working, taking care of the kids, the house, the yard–it can be very easy to miss these subtle signs that may indicate your dog is feeling pain.

Many times the symptoms get much worse before it’s recognized as something being wrong.

The other side of mobility issues is restlessness. Does your dog get up often to change positions or move to a new location? Does he move around a lot and not appear to be sleeping as much? 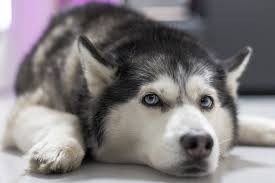 When my children were younger, we had a beautiful Husky/Collie mix named Casey. She was a wonderful family dog who loved to be outside, no matter how cold it was.

When Casey was about 8 years old, I looked out in the backyard one morning and saw her oddly standing by our fence. I went out and tried to get her to come to me, but she wouldn’t.

Casey somehow couldn’t walk through a small bush in front of her and appeared to be in distress when she tried to back up. I pushed the bush aside and she slowly walked to the house.

Alarmed, I took her to the vet that afternoon. I was heartbroken when I was told that she had a small fracture in a vertebra in her back!

Thinking back, I realized that she had been restless for a couple of days and hadn’t been sleeping much. If I’d recognized this as a sign that she was in pain, I could’ve spare her so much.

She was given a cortisone shot to relieve the pain, and when we got her home, she slept for about 15 hours straight! Casey never so much as gave a whimper that whole time, but her restlessness was a clue that I’ll never forget.

Is your dog showing signs of aggression that are very unlike him? Is he becoming antisocial or pulling away from people in a way that is unusual? 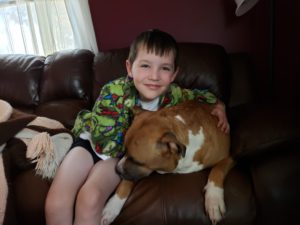 Any change in behavior such as this can be from your dog protecting himself. For instance, a dog that is feeling joint pain may avoid playing with kids as much or may spend more time in another room away from the family.

Unusual aggression is often a sign that pain is making a dog keep someone at bay. About a year ago, our daughter’s dog, Chief, occasionally would give a very low growl when my 6 year-old grandson would sit by him.

This was extremely odd behavior because the 2 of them adored each other, and Chief would often go lay down with him on the couch or the floor.

But Chief had injured one of his back legs when he was a puppy, and as he got older, he suffered from arthritis in that leg.

My daughter recognized that Chief was showing his aggression whenever his leg was bothering him and my grandson was running around a lot. Chief was giving a warning because he was afraid of getting hurt by a rambunctious little boy.

Once she understood the situation, she was able to make her dog more comfortable and teach her son how to help care for him.

Changes In Eating Or Drinking

Has your dog started to lose his appetite? Is he drinking more water than usual? Both of these are common signs that your dog could be having a problem.

A loss of appetite can be a symptom of a number of illnesses or diseases. But if your dog is avoiding eating, especially things like hard treats, it could also be from dental pain.

If your dog is drinking an unusual amount, there are several issues that could be causing him to lose excess amounts of water. Recognizing this common symptom can help you and your vet get started with a healing plan as early as possible. 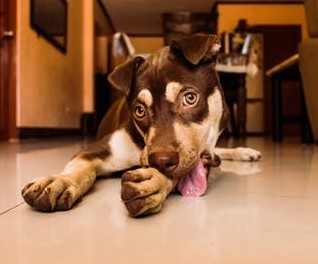 Has your dog started to groom himself much more frequently, such as licking his paws excessively? Or is he licking one point on his body a great deal that is abnormal?

Not only is licking a way for dogs to clean themselves, it’s also how they try to comfort themselves when something hurts many times.

After our German Shepherd, Sasha, had surgery for her torn CCL in her leg, everything appeared to heal well. But a few weeks later she started to lick a spot on her leg so much that she actually created a sore.

When we took her back to get checked, the surgeon told us that a small percentage of dogs develop an allergy of sorts to the metal plate that’s used to keep the titanium rods in place as she healed.

As the plate was no longer needed, Sasha had another surgery to have it removed. All was well……or so we thought.

About 3 weeks after that surgery, she again started licking a spot on her leg, creating another sore. The vet suspected that she had a deep infection in her leg and wanted to be aggressive with her antibiotics to ensure that it healed fully.

After 2 rounds of antibiotic shots, Sasha’s leg was finally healed!

However, if she hadn’t shown us that she was in pain by licking her leg excessively, it would’ve gotten much worse before we knew something was wrong.

Lumps Or Changes In Their Body 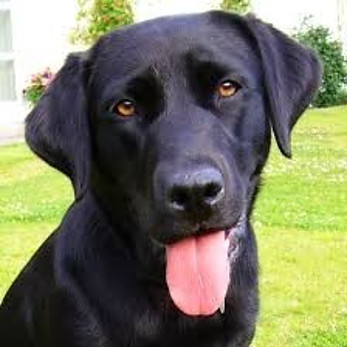 Does your dog have an unusual lump, swelling, or change in their body? Many times these can appear in a place where your dog can’t lick or show you that they have any discomfort.

Our beautiful Black Labrador, Malcolm, was 13 when I found a small lump by his throat. He loved laying on the couch with one of us and having his head and neck stroked, so I knew the lump wasn’t normal.

Our vet verified that it was most likely a Basel cell cancer that wouldn’t be possible to remove, and Malcolm was too advanced in age to put him through a surgery anyway.

Since we found it early, we were able to have him for 6 more months before the day came when we knew it was time to let him go.

So if your dog is barking, growling, yelping, etc., in a way that is out of character at times, that could be a sign that they may be hurting somewhere.

Remember, it’s instinctive for a dog to hide pain and vulnerability. But unusual sounds or changes in their barking could be a clue that you need to look closer for a sign of discomfort. 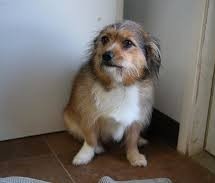 Shaking or trembling when a dog is cold or nervous is totally normal.

In fact, at our last vet visit there was a small dog who just trembled uncontrollably as soon as they brought him in the door and completely stopped the second they walked him out. The poor baby was just scared to death of going to the vet!

But if you see your dog shaking without an obvious reason, they could definitely be in pain, and you need to check it out.

It’s possible that they got into something poisonous or that they ate a large amount of something that can be harmful to dogs, like chocolate, for example.

Some diseases or infections can also make a dog shake or tremble, such as pancreatitis.

Just like any of us, if a dog has been very active or is hot, they are going to pant, and it’s totally normal.

But if you notice your dog panting heavily when there doesn’t appear to be a reason, you need to look closer. This could be a sign that they are in distress or in pain somewhere.

On the flip side, if your dog’s breathing appears shallow or labored, they could be having trouble getting enough air and need to be checked out right away.

Is your dog standing very rigid or stretching himself out a lot? This is a common sign of intestinal discomfort.

Our male German Shepherd, Tahlen, loves to chew on scraps of wood from our woodpile. No matter how many times we take them away from him, he loves to sneak up and steal a small piece of wood and play Keep Away with Sasha.

However, every once in a while he gets an upset stomach from it, which means we have a mess to clean up!

We’ve recognized that whenever his stomach is upset, he stands very still and rigid for a few minutes. That’s enough time for us to get him outside and keep an eye on him to be sure there’s nothing else going on.

Some dogs will lay with their paws crossed and their bottom in the air as a way to stretch out and relieve discomfort.

Just like humans, intestinal distress is usually just temporary. But if you see your dog doing these things excessively, it may be time to suspect something else is going on. 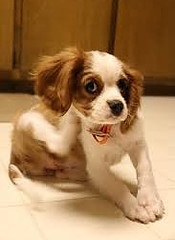 We all have seen dogs shake their head or scratch their ear occasionally.  But if your dog starts doing them a lot, he could have an ear infection or a yeast infection in the ear.

Anyone whose dog has had one of these ear infections knows just how uncomfortable and downright painful they can be for them!

From experience with our dogs, the sooner you can identify that their head shaking and ear scratching could be signaling a problem, the better.  Having your poor pooch keep you up all night with him crying and shaking his head from the pain isn’t fun for anybody!

Get To Know Your Dog Well

All the things I’ve listed above are ways that your dog could be telling you that he’s uncomfortable or in pain.

But in my experience, the very best way you can help your dog is to pay attention and be aware of what is normal and typical behavior for your particular pooch.

Something could be totally normal behavior for other pets you’ve had or someone else’s dog. But if it’s unusual for your dog, take notice and look to see if he’s telling you that something’s just not quite right.

I learned that lesson the hard way with Casey and her back injury–no matter how busy I was with kids and work, I could’ve helped her so much sooner by paying attention to the signs that were in front of me.

Do you have any other signs or tips that you’ve seen for how to know if your dog is in pain? I’d love for you to share them with us in the comments below!

Life is always better when you share it with a dog!

Hi! My name is Janelle--a wife, mother, grandmother, and avid dog lover! When my husband and I come home, we are greeted by 2 white German Shepherds, Sasha and Tahlen, who make sure we know how loved and missed we are every minute we're gone. Join me in my journey of finding the very best of the best for our beloved pooches and yours!